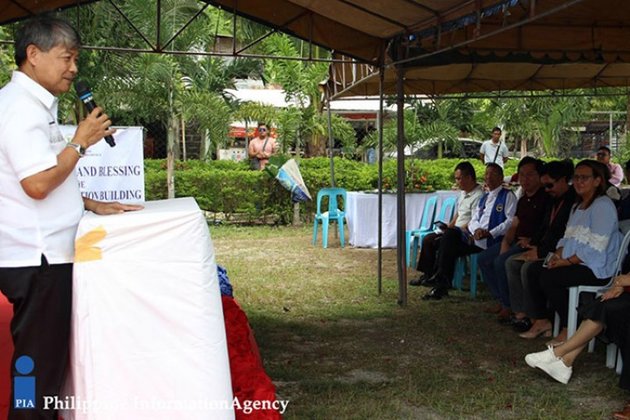 LUNA, La Union, June 18 (PIA) - - The Philippine Veterans Affairs Office (PVAO) sought the inclusion of the heroism and war exploits of the Filipinos in Bessang Pass in the schools' subject through enactment of an ordinance by the local government units (LGUs) in Region 1.

"I'm appealing to the LGUs in Region 1 to enact an ordinance mandating the incorporation in the schools' subject the history of the epic 'Battle of Bessang Pass' and other World War II battles in the country to let the students know about the heroism of the Filipinos particularly the Ilokanos," said retired Lieutenant General Ernesto G. Carolina, PVAO administrator.

General Carolina visited on Friday the shrine of the United States Armed Forces in the Philippines North Luzon (USAFIP-NL) National Military Shrine at Camp Spencer in Barangay Darigayos, this town and led the formal inauguration of a newly- constructed administration building.

He said the PVAO had already developed and published several books about the victory of the Battle of Bessang Pass and other stories of war exploits of the Filipinos during the WWII.

PVAO initially distributed the copies of these two books about "Bessang Pass" in some LGUs in Region 1 provinces and in Metro Manila during special occasions.

Through the inclusion of the history of "Battle of Bessang Pass" in schools' curriculum, he said the heroism of the Filipinos during the war will not be forgotten and will continue to inspire the youths to become responsible and committed Filipino citizens.

"Enacted and implemented ordinances at the local level will be a prelude on the crafting of a national law in congress," said Carolina.

For her part, Luna town Mayor-elect Rachel D. Pinzon assured her full support to the appeal of General Carolina as she said this will be a one of the priorities of the new set of the municipal council.

She further expressed her gratitude to the PVAO for their continuing initiatives to developed and preserved the historic Camp Spencer in their town.

It is noted that Camp Spencer became the headquarters of the USAFIP -NL during WWII. The camp had played a major role in the liberation of "Bessang Pass" because it was the supply center of firearms and ammunitions for the attacking Filipino soldiers and guerillas. (JPNP/FGL,PIA1)

SYDNEY, NSW, Australia - Flags will be flown at half mast throughout New South Wales in Australia on Friday, following ...

Heads of state and government from dozens of countries arrived in Jerusalem to mark the 75th anniversary of the liberation ...

Senate approves impeachment rules after being rebuked by chief justice

LINGAYEN, Pangasinan, Jan. 24 (PIA) - As China is grappling to contain an outbreak of coronavirus, in the Philippipines, the ...

SYDNEY, NSW, Australia - Flags will be flown at half mast throughout New South Wales in Australia on Friday, following ...

Heads of state and government from dozens of countries arrived in Jerusalem to mark the 75th anniversary of the liberation ...