At Least Two Killed In Kashmir Gunbattle Amid Rising Tensions 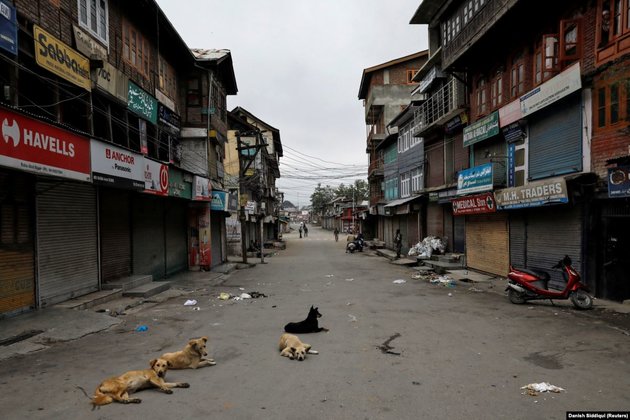 Indian security forces killed a suspected militant in a gunbattle in Kashmir on August 21, police said, the first clash since New Delhi removed the special status of the territory this month.

A police officer was also killed in the fighting that erupted in Baramulla in Indian-controlled Kashmir, police said.

Thousands of additional paramilitary troops have been deployed in Kashmir to control the insurgency and on August 20 they raided the old part of Baramulla, a police officer said.

Pakistan, meanwhile, said that three of its civilians died in Indian gunfire from across the de-facto border in Kashmir known as the Line of Control (LoC).

The Press Trust of India news agency quoted officials as saying one Indian soldier died and four were wounded when Pakistani troops opened fire on forward posts and villages along the LoC in the Poonch district on August 19.

At least 2,300 people have been detained in the Indian-controlled part of Kashmir since the start of a security crackdown and communications blackout that followed the removal of its special status, according to reports by high-ranking Kashmir police officers and arrest statistics.

Mostly young men were among those who were detained and included anti-India protesters as well as pro-India Kashmiri leaders.

The officials spoke on condition of anonymity because they aren't authorized to speak to reporters and feared retribution from their superiors.

The lockdown accompanied New Delhi's August 5 decision to strip the majority-Muslim region of its special status, which sparked resentment in Indian-administered Kashmir and across the border in Pakistani-controlled Kashmir, as well as in Islamabad.

It included curfews, a news blackout, and strict limits on movements by the public.

Officials told AP about 300 demonstrations have been held by Kashmiris in protest of the tighter restrictions. Some involved clashes with police since the lockdown.

Kashmir has been divided between India and Pakistan since they gained independence from Britain in 1947.

Two of the three wars between the two nuclear-armed neighbors were fought over the territory.

More than 50,000 people have been killed in the part of Kashmir that India controls in the past three decades, and critics say New Delhi's latest actions will further isolate the region and encourage armed resistance.

With reporting by AP

Google accused of spying on children

More Than 1,000 US military Veterans Condemn Trump Over Vindman Firing

A group of more than 1,100 U.S. military veterans from all five branches have signed a statement lashing out at ...

U.S.-India trade deal not expected during Trump visit next week

WASHINGTON, DC - President Donald Trump has signalled that a "big trade" deal might not be on the agenda during ...

The federal judge Refuses to Put Off Stone Sentencing

The federal judge in the Roger Stone trial is refusing to postpone sentencing while President Donald Trump says the conviction ...

Delving in among the smoke and mirrors of the Pell case

Compound Probability and the CrownIn his appeal to the Intermediate Court, Bret Walker referred to 13 solid obstacles that pointed ...

Bayrob hackers infected 400,000 computers before being taken down

The hackers were like modern-day John Dillingers, brazenly committing their crimes and repeatedly escaping law enforcement's grasp.But like Dillinger and ...

China's efforts to control the deadly outbreak of a new coronavirus "are working", Beijing's top diplomat said Thursday, attributing an ...

Coronavirus more closely aligned to flu than other viruses

CHICAGO, Illinois - Scientists in China who studied the nose and throat swabs from 18 patients infected with the new ...

LONDON, UK - The White House has denied a claim aired in a London court this week that President Donald ...