VANCOUVER, CANADA / ACCESSWIRE / October 16, 2019 / BeMetals Corp. ('BeMetals' or the 'Company') (TSXV:BMET) (OTCQB:BMTLF) is pleased to announce the results of its first diamond drilling program at the Pangeni Copper Exploration Project ('Pangeni Project' or the 'Project'), located on the western extension of the Central African Copperbelt in Zambia (the 'Zambian Copperbelt'). This program comprised seven shallow drill holes totaling some 1,275 metres to test three high-priority targets. The Pangeni Project exploration licence totals 575km2 in an area where prospective extensions to the Zambian Copperbelt are covered by a thin veneer of Kalahari sand units. See Figure 4 for property location.

Highlights of the 2019 diamond drilling Program

Note: Intertek Genalysis completed the analytical work with the core samples processed at their preparation facility in Kitwe, Zambia. All analytical procedures were conducted in an Intertek Genalysis laboratory in Australia. Reported widths are drilled core lengths as true widths are unknown at this time. Based upon current data it is estimated true widths range between 80 to 90% of the drilled intersections.

John Wilton, President and CEO of BeMetals, commented, 'We are very encouraged by the results of our first core drilling program at the Pangeni Project in Zambia. These results have delivered and exceeded our stated objectives at the commencement of this drilling. We have now successfully confirmed the prospectivity of this Project to deliver, potentially tier one scale, copper discovery through the identification of copper sulphide mineralization and associated alteration systems. This area is an under explored region of potential extensions to the Zambian Copperbelt.

Today's results delivered a number of significant copper intersections for this early stage project especially considering we are exploring through thin Kalahari sand cover. Importantly these intersections are related to broader zones of anomalous copper and associated with alteration minerals known to occur in copper deposits within the region. Twelve core holes have now been drilled on this 575km2 property to date, including five drill holes completed in 2016, targeting four prospects, each separated by at least 7 kilometres. Eight of the total twelve diamond drill holes, have to date returned significant copper sulphide mineralization.

The Company's approach to exploring this property, through highly experienced interpretation of airborne magnetic data with follow up aircore drilling to generate copper targets beneath the Kalahari sand cover, has proved to be successful and cost effective. We will now fully integrate this data and design the next phase of exploration which will likely focus on further aircore drilling at the D2, SW (E2) and CT targets (See Figure 2) to test for extensions and vectors towards higher grade copper mineralization at these prospects during the 2020 field season. The E2 target results represent a 600 metre northeast extension, of the previously drilled SW Target, under the Kalahari sand cover units. This consolidated SW (E2) prospect has now returned bedrock copper mineralization over some two kilometres of strike.

We are also pleased to continue our strong technical and local community relationship with both Copper Cross Zambia Limited and Pangeni Mineral Resources Limited, the optionees of this property.'

Between the 2nd of July and 23rd of August 1,275 metres of core drilling was completed on the Project during the 2019 field season. The core was transported to the town of Kitwe in the Zambian Copperbelt for sampling. Full laboratory results were received on the 4th of October, and quality assessments of the data completed.

The results indicate a number of anomalous zones of predominantly copper sulphide mineralization are present at both the D2 and E2 targets. These targets were generated from two phases of aircore drilling at the property (See previous Company news releases from January 9th 2019 and November 5th 2018). The location of the three targets (D2, E2 and H1) tested are indicated on Figure 1.

Table 1 below shows the selected zones of copper mineralization intersected from the follow up core drilling. Copper mineralization is observed as both disseminated and within veins and is associated with feldspar and kyanite alteration, typical of certain large Zambian copper deposits. Table 2 shows the orientation, end of hole depths and collar co-ordinates for the drilling program. Core drill testing of target H1 did not return any significant copper mineralization and a re-assessment of this target will be undertaken.

Figure 2 illustrates the zones of copper mineralization at the D2 Prospect including intersections of 5.50 metres grading 0.53% Cu and 5.56 metres grading 0.47% Cu in drill holes D2-C1 and D2-C2 respectively, and their association with various alteration minerals (kyanite, albite and scapolite).

Figure 3 shows the multiple zones of copper mineralization returned at the E2 target also associated with important alteration minerals that includes 0.5 metres grading 2.73% Cu in drill hole E2-C3. This represents the highest grade copper sample intersected on the property to date, which is associated with a quartz vein with chalcopyrite, and alteration minerals of feldspar and kyanite.

These encouraging core drilling results will be used to update the geological interpretation of the Project with a focus on designing future exploration to identify higher grade copper mineralization in the proximity of the D2, SW (E2) and CT prospects. Such work will include a detailed structural interpretation of the drill hole core to orientate features associated with the mineralization and guide areas for future aircore drilling. This will ultimately provide vectors towards zones of potential higher grade copper for core drill testing.

Note: Intertek Genalysis completed the analytical work with the core samples processed at their preparation facility in Kitwe, Zambia. All analytical procedures were conducted in an Intertek Genalysis laboratory in Australia. Reported widths are drilled core lengths as true widths are unknown at this time. Based upon current data it is estimated true widths range between 80 to 90% of the drilled intersections. A nominal cut-off grade of 0.1% Cu has been used to determine the boundaries of the total intersections with internal dilution at 0.05% Cu not exceeding 23% of the intercept to illustrate the anomalous zones. * denotes intersections where a 0.25% Cu has been used. † denotes single sample. 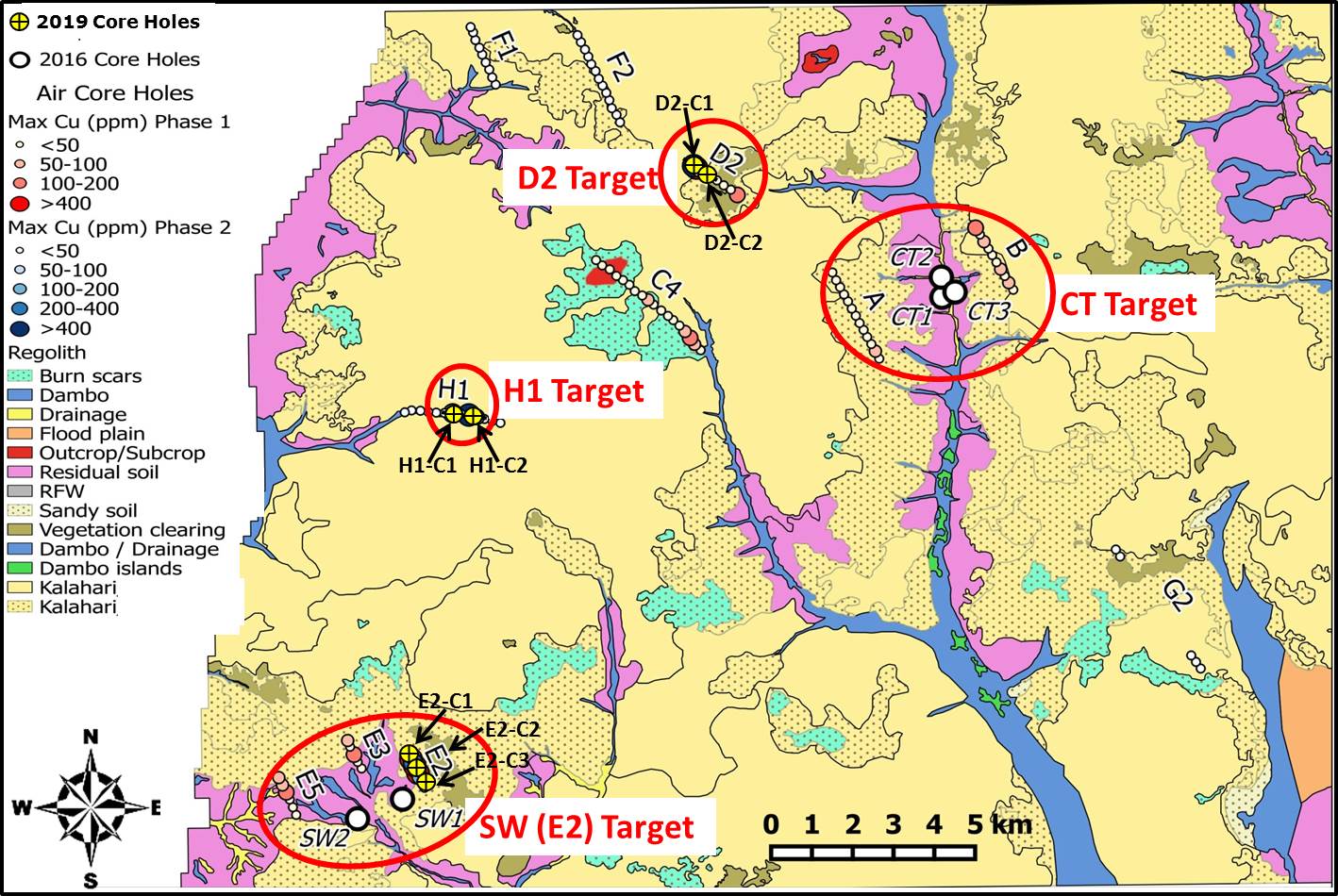 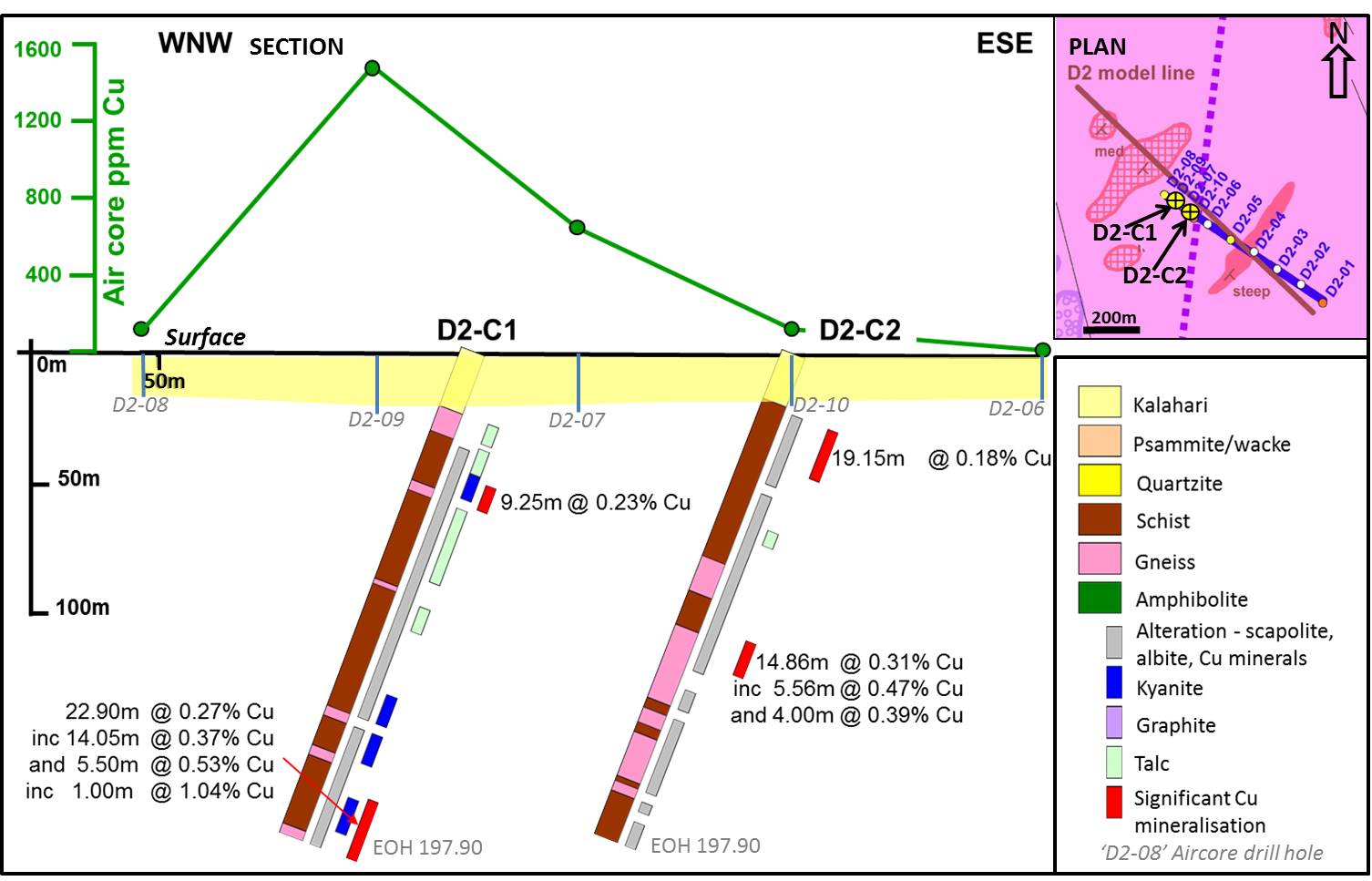 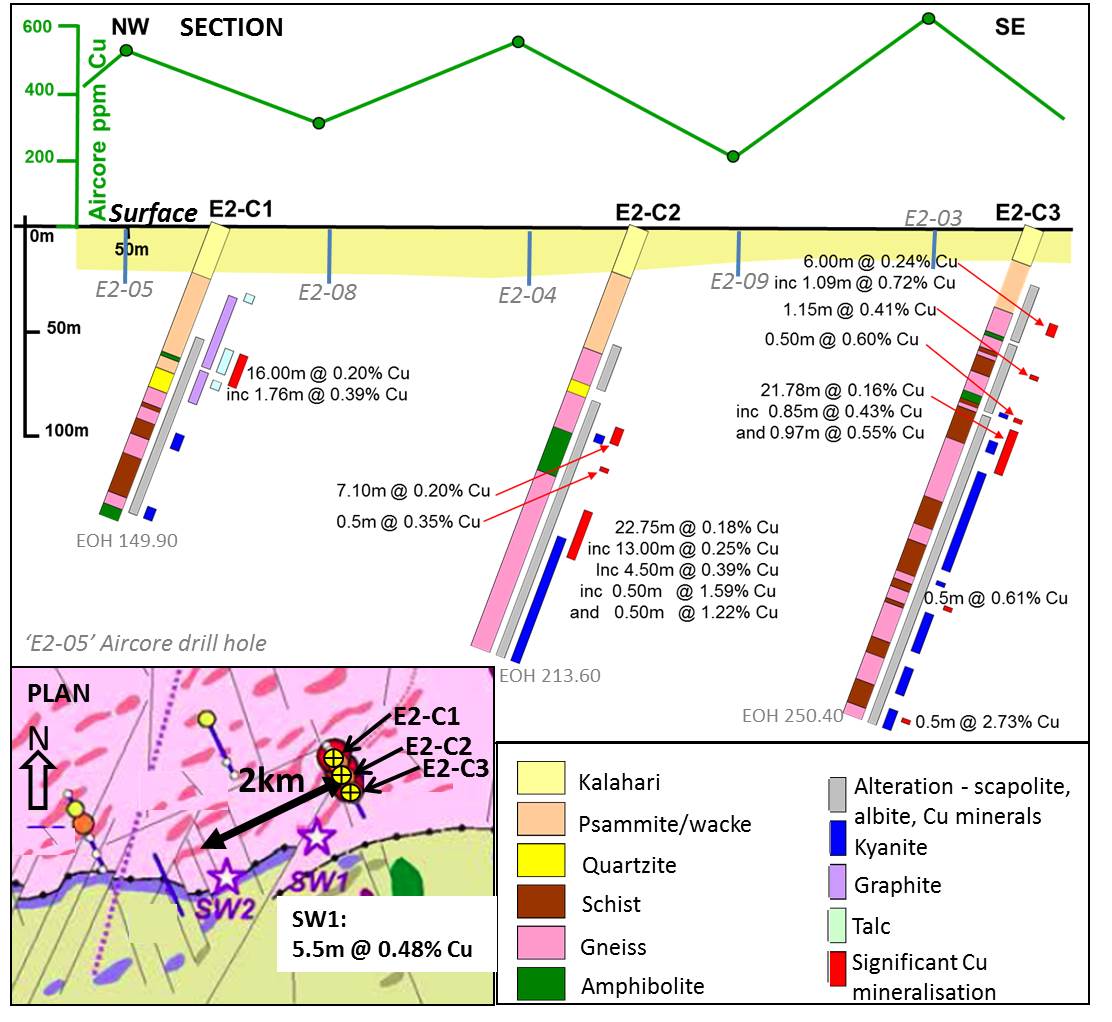 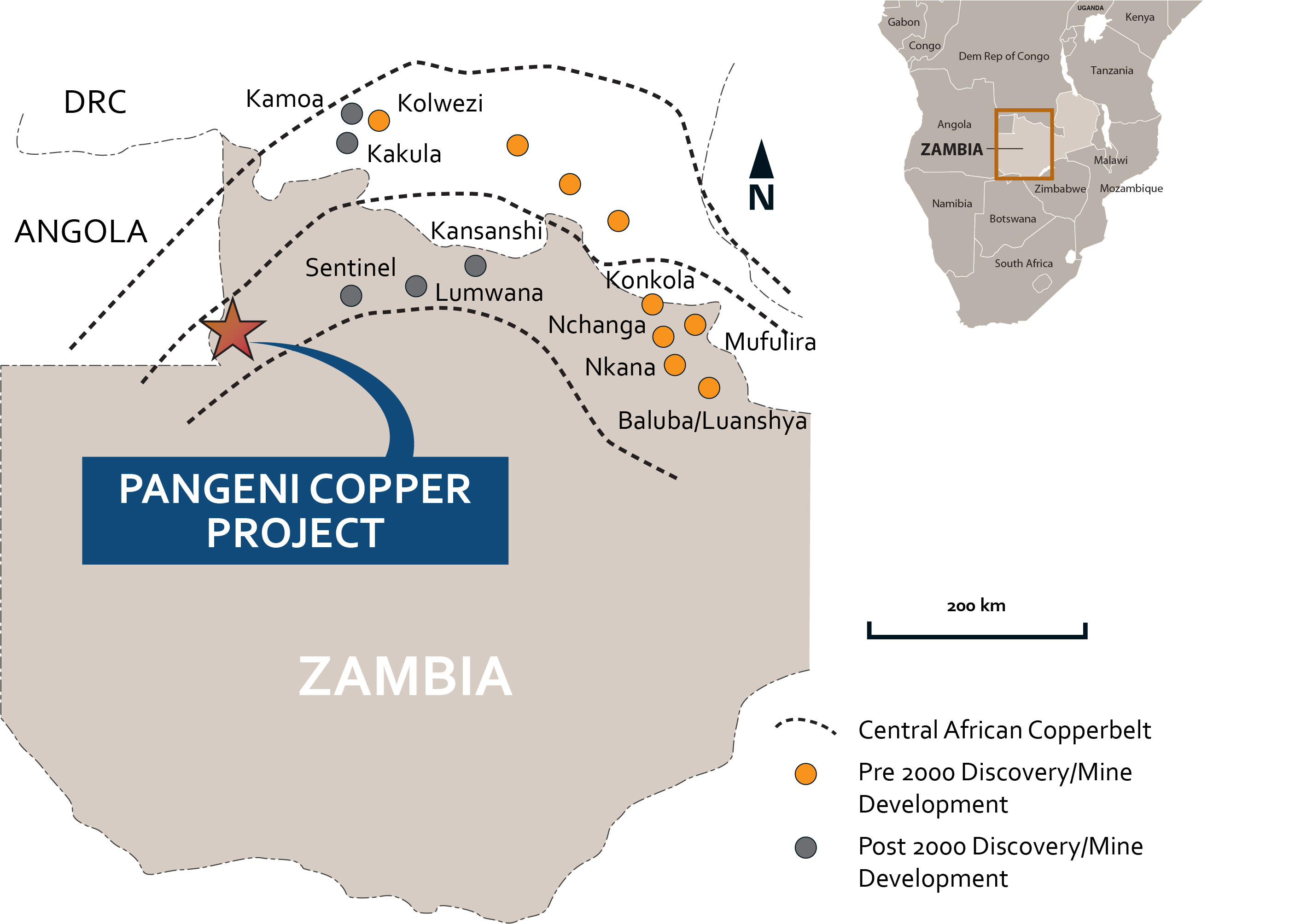 The results reported here for this core drilling program were analyzed by Intertek Genalysis, an independent and accredited laboratory. Samples were prepared at their facility in Kitwe, Zambia and analytical work conducted in Australia. The results were determined using multi-acid, near total digest, and analyzed by Inductively Coupled Plasma ('ICP') Optical (Atomic) Emission Spectrometry ('OES'). The core sampling was conducted with a robust sampling protocol that included the appropriate insertion of standard reference material, duplicates, and blanks into the sample stream.

Field operations and management have been provided by Remote Exploration Services ('RES') an independent geological consulting and contracting company. The core drilling was conducted by Blurock Mining Services, of Kitwe, Zambia.

The Pangeni Project is located on the western extension of the Zambian Copperbelt, within the Lufilian Arc, underlain by Katangan Supergroup metasediments situated unconformably on basement schists and gneisses, which are covered by a thin veneer of Kalahari sands. The open pit Sentinel Copper Mine is operated by First Quantum Minerals Ltd. some 130 kilometres to the northeast of the Pangeni Project. A number of major international mining companies have identified this region of the Zambian Copperbelt to be prospective for the discovery of tier one copper mines and are also conducting extensive exploration work in this area.

BeMetals' founding Directors include Clive Johnson, Roger Richer, Tom Garagan and John Wilton. BeMetals is a new base metals exploration and development company focused on becoming a significant base metal producer through the acquisition of quality exploration, development and potentially production stage projects. The Company is advancing both its early-stage, tier-one targeted, Pangeni Copper Exploration Project in Zambia, and its advanced high-grade, zinc-silver polymetallic underground exploration at the South Mountain Project in Idaho, USA. The Compan

In the past month, there's been an outpouring of support for Black Lives Matter from America's largest corporations.You might have ...

Countries across the globe re-thinking reopening as coronavirus surges

As coronavirus cases around the world approach 11.5 million, governments are struggling with how to reopen their economies, leading some ...

Bullying of International court and Bank of England laid bare

On January 9, 2020, Ambassador Karen Pierce-the United Kingdom's permanent representative to the United Nations-spoke at a meeting on the ...

Countries across the globe re-thinking reopening as coronavirus surges

As coronavirus cases around the world approach 11.5 million, governments are struggling with how to reopen their economies, leading some ...