Mahomes to Texas Tech grads: 'Win your own Super Bowl' 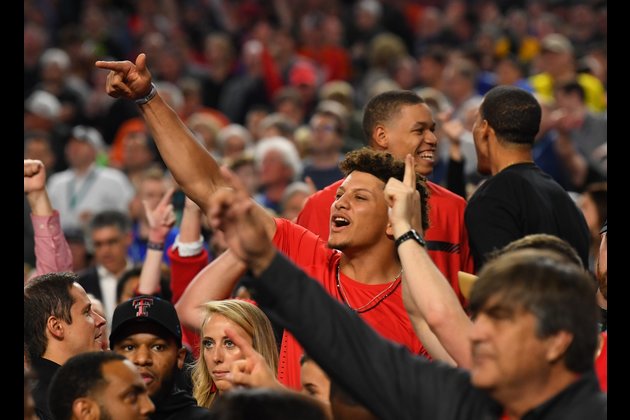 Super Bowl-winning quarterback Patrick Mahomes addressed graduates of his alma mater, Texas Tech, on Saturday, encouraging them to "go out and win your own Super Bowl."

"I know this isn't the graduation ceremony that you and your families had envisioned, but that doesn't change the outcome or all the hard work, long hours and sacrifices that you made to achieve this milestone," the Kansas City Chiefs quarterback said in his address that aired during the school's virtual commencement. "I know this is sure not how you imagined spending your last days as a student."

The ceremony was held online because of the coronavirus pandemic.

Mahomes continued in his statement, which lasted about 75 seconds, saying:

"But the world is in a different place today than it was just a few weeks ago. And as Red Raiders, we're built to persevere in difficult times. We've all had to take a moment and learn to adjust to these new challenges. And when the odds are stacked against us, we make a play -- and I can tell you this is going to make us all more competitive and hungrier than ever.

"Remember, this is still a day to celebrate, to look back on your friends you made, the professors who have changed your life and the memories that you will cherish forever. Whatever plans lie in front of you, I have no doubt you will go out there and show the world what it means to come from Lubbock, Texas. Go out and win your Super Bowl. Congrats, Class of 2020. I can't wait to see what you do next."

Mahomes played three seasons (2014-16) at Texas Tech before becoming a first-round selection in the 2017 NFL Draft. In his first season as a starter for Kansas City in 2018, he was named league Most Valuable Player. After the 2019 season, the Chiefs won the Super Bowl, defeating the San Francisco 49ers 31-20.

He isn't the only NFL player to take part in a virtual commencement this spring. Three weeks ago, twins Shaquill and Shaquem Griffin, who play for the Seattle Seahawks, addressed the graduates at UCF, where they played.

Officials say that seven civilians have been killed and six others wounded in a roadside bomb attack in northern Afghanistan.The ...

Tensions between U.S. black communities and police go back centuries

Outrage over racial profiling and the killing of African Americans by police officer ...

Americans continue to shun use of masks

ALEXANDRIA, VIRGINIA - At a grocery store in Alexandria, Virginia, customer Laura Shafor was dismayed about a couple who weren't ...

Officials say that seven civilians have been killed and six others wounded in a roadside bomb attack in northern Afghanistan.The ...

Tensions between U.S. black communities and police go back centuries

Outrage over racial profiling and the killing of African Americans by police officer ...

WASHINGTON, DC - Under siege in the White House, President Donald Trump is aggravating America's latest racial anguish in a ...

JERUSALEM - Israel's defense minister apologized on Sunday for the Israeli police's deadly shooting of an unarmed Palestinian man who ...