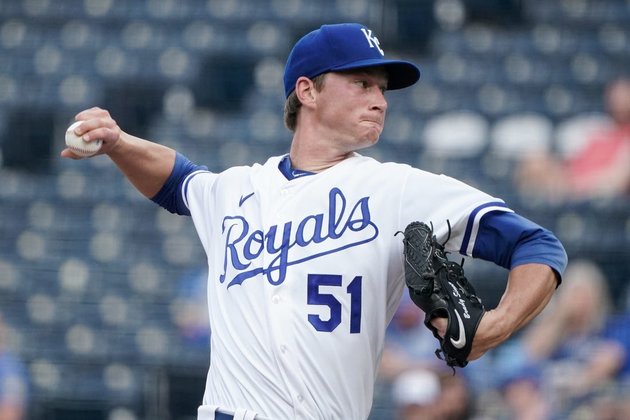 Kansas City Royals manager Mike Matheny was asked if Brady Singer had earned another start last week after the right-hander tossed seven scoreless innings in his first start of the season.

Although Matheny said it was "too fresh" to gauge that, the smile on his face made it clear that Singer haddone just that.

Singer will get the chance Sunday to prove that his first start was not a fluke when the Royals host the Minnesota Twins in the finale of a three-game series.

The Twins followed a 6-4 win over the Royals on Friday with a 9-2 victory Saturday.

Walks hurt the Royals, as they issued three leadoff walks Saturday, and all three runners scored. In the series, the Royals have been outscored 15-6, and more than half the Twins' runs came after hitters reached base on a walk.

The Royals will need Singer to keep away from the free bases.

Singer's two-pitch arsenal of a sinker and a slider had helped him garner attention and progress through the minors. But his lack of a developed changeup caused him to struggle, eventually leading to his demotion.

But in his last start, against the Chicago White Sox on Tuesday, Singer mixed in his changeup among his 93 pitches and kept the White Sox off balance all game long.

"That was one of those when they come back (they say), 'I'm going to show you something,'" Matheny said after Singer's last outing. "That's exactly how you're supposed to handle this. He came back with a purpose. He looked like a completely different pitcher.

"Every one of his 17 changeups had effectiveness on the following pitch."

Singer said he wasn't doing anything differently with the changeup, other than using it more often.

"I felt like all three pitches were there," he said. "Obviously I wanted to go out there and throw well. The changeup felt really good. I felt like I threw some quality ones."

Singer has struggled in his career against the Twins, going 1-5 with a 6.00 ERA in seven starts.

Ober has not pitched for the Twins since suffering a right-groin strain on April 28.

He has been pitching off the mound for the past several weeks. He recently made a rehab start at Triple-A St. Paul and allowed five runs (four earned) on four hits and no walks while striking out seven in five innings.

Ober said he felt "pretty good, just a little sore" after leaving the game against the Tigers in late April.

"(Manager) Rocco (Baldelli) came out and asked what was going on," Ober said. "I said the groin was a little tight. He said, 'You're not going any more.' It's early in the season and it's cold out. It's probably the right decision."

Little did Ober know that it would be almost a month before his next outing in the majors.