Texas Governor: Teen Warned He Was About to Attack Elementary School 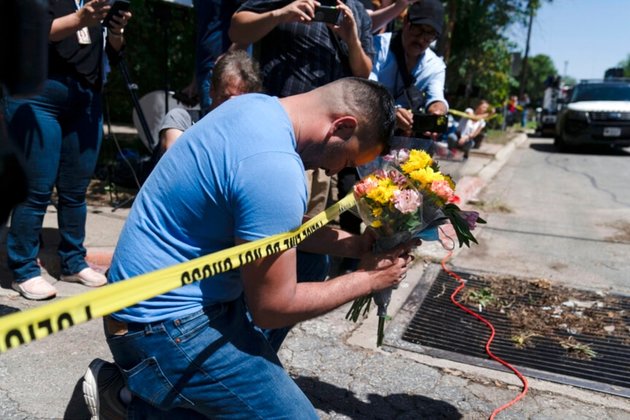 The U.S. teenage gunman who killed at least 19 children and two adults Tuesday warned in a private message on a social network shortly ahead of time that he was about to shoot up an elementary school, Texas Governor Greg Abbott said Wednesday.

But Abbott said officials had not discovered any mental health care concerns officially registered about Ramos, although news outlets reported that on occasion Ramos had randomly fired a BB gun at people along the streets of Uvalde and had thrown eggs at cars. Acquaintances said he was angered that he had not completed enough classes to graduate this week with his classmates.

Stefanie Garcia, 28, left, breaks down as she visits Robb Elementary School to pay her respects in Uvalde, Texas, May 25, 2022. Desperation turned to sorrow for families of grade-schoolers killed after an 18-year-old gunman barricaded himself in their Texas classroom and began shooting, killing at least 19 fourth-graders and their two teachers.

Abbott said that 30 minutes before Ramos stormed into the school, he posted a message on Facebook saying, "I'm going to shoot my grandmother," with whom he lived, and went on to fire a shot at her face. The woman, Celia Martinez, 66, survived the attack and was hospitalized, but was reported in serious condition.

Moments later, he said in another message, "I shot my grandmother."

Then, in a third message, Ramos warned, "I'm going to shoot an elementary school," Abbott recounted.

A Facebook spokesman clarified that the text messages were sent to one person but would not disclose which of Facebook's platforms the gunman used.

After Ramos crashed his car in a ditch near the school, police officers employed by the school district "engaged with the gunman," though no gunfire was exchanged. Ramos then carried an assault weapon into the school and killed all his victims in the same fourth-grade classroom, a law enforcement official told CNN.

Abbott said 17 others were injured in the mayhem, but that none of them had life-threatening injuries.

The issue of gun control and sales is one of the most contentious in U.S. politics, and Abbott's news conference was no exception. As the governor, a gun rights advocate, finished speaking, Beto O'Rourke, his Democratic gubernatorial opponent in the November election, shouted at him, "You are doing nothing!" to prevent gun violence.

"Abbott made it easier to carry guns in public," O'Rourke said on Twitter. "The moment to stop the next slaughter is right now." 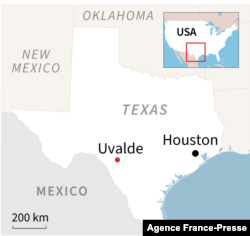 A map showing the location of Uvalde, Texas.

President Joe Biden, in an emotional White House address late Tuesday, expressed condolences to the victims' families, while questioning why mass shootings are so common in the U.S. and urging lawmakers to support what he called "common sense gun laws.'

"Why are we willing to live with this carnage?" he asked. "Why do we keep letting this happen? Where in God's name is our backbone? When in God's name are we going to stand up to the gun lobby?"

It was not immediately clear that the latest mass killing changed the minds of any opposition Republican lawmakers in the Senate, who in the past have blocked restrictive gun measures favored by Biden and Democratic senators.

At least 10 Republican lawmakers would need to join all 50 Democrats in the chamber to pass restrictive gun control legislation.

Crime scene tape surrounds Robb Elementary School in Uvalde, Texas, May 25, 2022, site of a mass shooting that occurred the day before. At least 19 fourth-graders and their two teachers were killed.

Some lawmakers talked of trying to reach legislative compromises that would require further background checks of gun buyers, extend the time frame for such checks or ban the sale of guns over the internet.

The U.S. banned the sale of assault weapons, often used in mass killings and, according to police, deployed by the gunman in Tuesday's attack, from 1994 to 2004. Congress then failed to renew the law.

Legislative attempts to tighten gun laws have been adamantly opposed by lobbyists for gun manufacturers and pro-gun lawmakers who cite Americans' rights to gun ownership that are enshrined in the U.S. Constitution.

Biden said he learned about the shooting as he was returning from a trip to Asia.

The URL has been copied to your clipboard

He then called on lawmakers to stand up to the gun lobby.

Lydia Martinez Delgado wrote on Facebook that her niece, Eva Mireles, was a teacher at the school and among those killed.

"I'm furious that these shootings continue," Martinez Delgado said in a statement. "These children are innocent. Rifles should not be easily available to all. This is my hometown, a small community of less than 20,000. I never imagined this would happen to especially loved ones."

The school district's superintendent, Hal Harrell, told reporters that grief counseling services were being made available for students and that the remaining few days of the school year were canceled.

"My heart is broken today," Harrell said. "We're a small community, and we're going to need your prayers to get through this." 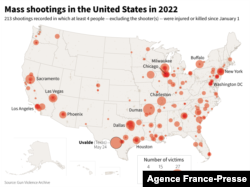 Law enforcement officials say that Ramos legally purchased two assault weapons days after his 18th birthday a couple weeks ago, along with 375 rounds of ammunition. He posted pictures of the weapons on a social media account attributed to him.

Both Abbott and Cruz were among a group of Republican figures, including former President Donald Trump, scheduled to appear Friday in Houston at the annual convention of the National Rifle Association, a gun rights group that has opposed gun control measures.

Cruz has also received $176,274 in campaign contributions from the NRA, according to Brady United, a nonprofit advocating for gun control.

The Texas elementary school has an enrollment of about 600 students in the second, third and fourth grades and sits in a mostly residential neighborhood of modest homes. The town has a population of about 16,000 people and is the seat of government for Uvalde County. It is about 135 kilometers west of San Antonio and about 120 kilometers north of the border with Mexico.

Texas has been the scene of several mass shootings over the past five years. One year before the Santa Fe school shooting in 2018, a gunman at a Texas church killed more than two dozen people during a Sunday service in the small town of Sutherland Springs. In 2019, another gunman at a Walmart in El Paso killed 23 people in a racist attack.

Some information for this report came from The Associated Press and Reuters.