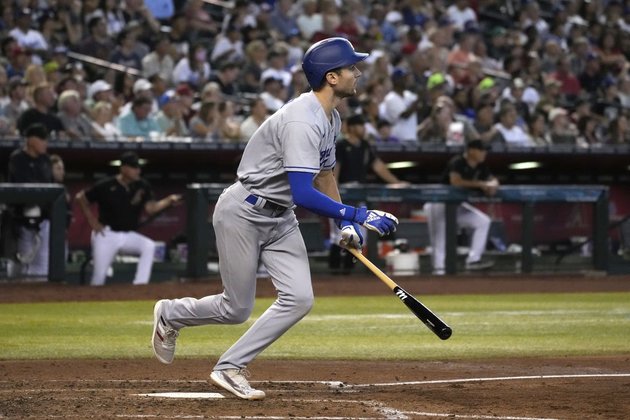 Mookie Betts homered for the second straight game and the Los Angeles Dodgers notched a 3-2 win over the Arizona Diamondbacks on Saturday in Phoenix.

Justin Turner had four hits and Tony Gonsolin (5-0) tossed six strong innings as the Dodgers won for the 12th time in their last 14 games.

Los Angeles improved to 24-5 against the D-backs over the past two seasons, including seven straight wins.

Jake McCarthy had two hits and an RBI for Arizona, which was outhit 10-5 and had just three baserunners in the final seven innings.

Betts continued his torrid month by depositing the second pitch of the game from Merrill Kelly (3-3) over the right field fence for his National League-leading 14th homer.

Arizona responded with two runs in the second with a pair of RBI triples by McCarthy and Geraldo Perdomo.

Los Angeles regained the lead with two runs in the fifth. Trea Turner delivered a one-out RBI single to extend his hitting streak to 20 games before Will Smith followed with a sacrifice fly that scored Freddie Freeman from third base.

Turner's 20-game hitting streak is the longest in the majors this season. He is batting .359 (28-for-78) with three homers and 18 RBIs during that stretch.

Los Angeles pitchers retired 22 of the last 25 batters faced to end the game. Relievers Justin Bruihl and Alex Vesia each pitched one scoreless inning before Hudson entered in the ninth.