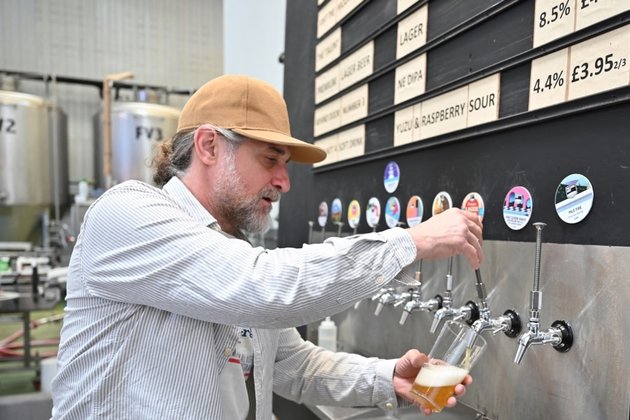 LONDON - Louis Bloomsfield inspects the kegs of beer at his brewery in north London, eagerly awaiting June, when he will get an extra day off every week.

The 36-year-old brewer plans to use the time to get involved in charity work, start a long-overdue course in particle physics and spend more time with family.

He and colleagues at the Pressure Drop brewery are taking part in a six-month trial of a four-day working week, with 3,000 others from 60 U.K. companies.

The pilot -- touted as the world's biggest so far -- aims to help companies shorten their working hours without cutting salaries or sacrificing revenues.

Similar trials have also taken place in Spain, Iceland, the United States and Canada. Australia and New Zealand are scheduled to start theirs in August.

Alex Soojung-Kim Pang, a program manager at 4 Day Week Global, the campaign group behind the trial, said it will give firms 'more time' to work through challenges, experiment with new practices and gather data.

Smaller organizations should find it easier to adapt, as they can make big changes more readily, he told AFP.

Pressure Drop, based in Tottenham Hale, is hoping the experiment will not only improve their employees' productivity but also their well-being.

At the same time, it will reduce their carbon footprint.

The Royal Society of Biology, another participant in the trial, says it wants to give employees 'more autonomy over their time and working patterns.'

Both hope a shorter working week could help them retain employees, at a time when U.K. businesses are confronted with severe staff shortages, and job vacancies hitting a record 1.3 million.

'It will be difficult for a company like us which needs to be kept running all the time, but that's what we will experiment with in this trial,' he said.

Smith is mulling giving different days off in the week to his employees and deploying them into two teams to keep the brewery functioning throughout.

When Unilever trialed a shorter working week for its 81 employees in New Zealand, it was able to do so only because no manufacturing takes place in its Auckland office and all staff work in sales or marketing.

The service industry plays a huge role in the UK economy, contributing 80% to the country's GDP.

A shorter working week is therefore easier to adopt, said Jonathan Boys, a labor economist at the Chartered Institute of Personnel and Development.

But for sectors such as retail, food and beverage, health care and education, it's more problematic.

Boys said the biggest challenge will be how to measure productivity, especially in an economy where a lot of work is qualitative, as opposed to that in a factory.

Indeed, since salaries will stay the same in this trial, for a company to not lose out, employees will have to be as productive in four days as they are five.

Yet Aidan Harper, author of The Case for a Four Day Week, said countries working fewer hours tend to have higher productivity.

'Denmark, Sweden, the Netherlands work fewer hours than the U.K., yet have higher levels of productivity,' he told AFP.

'Within Europe, Greece works more hours than anyone, and yet have the lowest levels of productivity.'

Employees in the U.K. work roughly 36.5 hours every week, against counterparts in Greece who clock in upward of 40 hours, according to database company Statista.

Phil McParlane, founder of Glasgow-based recruitment company 4dayweek.io, says offering a shorter workweek is a win-win, and even calls it 'a hiring superpower.'

His company only advertises four-day week and flexible jobs.

They have seen the number of companies looking to hire through the platform rise from 30 to 120 in the past two years, as many workers reconsidered their priorities and work-life balance in the pandemic.