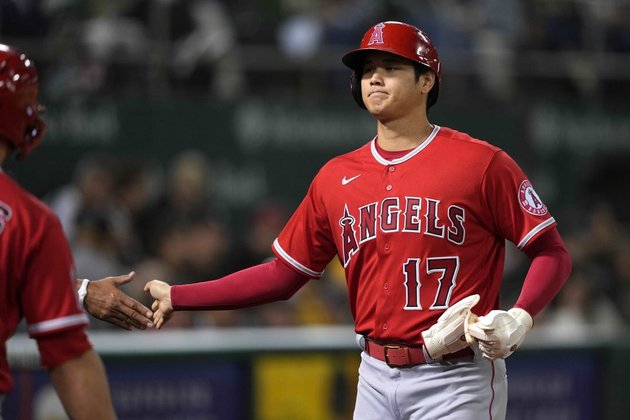 Seth Brown kept Oakland alive with a two-out, two-run single in the ninth inning and pinch hitter Tony Kemp stroked a walk-off single with one out in the 10th Monday night, rallying the Athletics to a 5-4 victory over the visiting Los Angeles Angels.

Kemp's heroics came after the A's (58-102) rallied from a late 4-0 deficit with two in the eighth and two more in the ninth. Brown's game-extending single off Aaron Loup drew the hosts even in the ninth.

Brown also played a critical role in the eighth-inning scoring with an RBI triple that came between singles by Conner Capel and Shea Langeliers.

Angels left-hander Patrick Sandoval threw six shutout innings, allowing five hits. The effort lowered his season ERA to 2.91, making the 25-year-old the first Angel under the age of 26 to start 20 or more games in a season with an ERA under 3.00 since Jim Abbott 30 years ago in 1992.

Only 12 Angels have accomplished the feat, including Nolan Ryan, Abbott twice and Frank Tanana three times.

Sandoval walked one and struck out six.

He left after six innings with a 4-0 lead thanks to a pair of two-run innings by his supporting cast.

Adell opened the scoring with a two-out, two-run single off A's starter Adrian Martinez in the fourth inning. A Ward double had set the stage, with the double immediately following an intentional walk to Thaiss and an unintentional pass to Logan O'Hoppe that loaded the bases.

Ohtani was in the middle of a two-run fifth with a double that scored Livan Soto, who had singled. Ward then followed with his second double, plating Ohtani to make it 4-0.

Martinez was pulled after 4 1/3 innings, charged with all four Angels runs on seven hits. He walked two and struck out five.

Nick Allen joined Brown with two hits for the A's, who out-hit the visitors 11-8.

Soto and Ward had two hits apiece for the Angels, who lost for just the fifth time in 17 meetings with the A's this season.