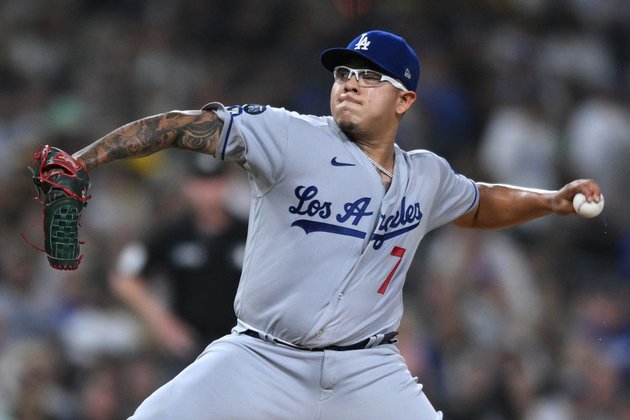 With a week remaining before they open their playoff run, the Los Angeles Dodgers will offer a postseason glimpse over the final two games of the regular season.

Los Angeles (110-50) is scheduled to have Julio Urias on the mound Tuesday against the Colorado Rockies, with the left-hander believedto be the Game 1 starter when the National League Division Series begins for the Dodgers on Oct. 11.

On Wednesday, in the regular-season finale, the Dodgers will send lefty Clayton Kershaw to the mound. The three-time Cy Young Award winner is expected to be the Game 2 playoff starter, although manager Dave Roberts has said he reserves the right to make adjustments.

"My total focus is on the next start against Colorado," Urias said through an interpreter about the idea he could be the team's Game 1 starter. "After that, we'll have that conversation."

The impressive 2022 comes after Urias was the only 20-game winner in the major leagues last season, an accomplishment that came as he posted a 2.96 ERA. He has a combined 2.56 ERA over his past two seasons, covering 62 starts and 355 2/3 innings.

"I don't really worry about the things that people say or the accolades or anything like that," said Urias, who is 5-2 with a 4.99 ERA in 18 lifetime appearances (15 starts) against the Rockies. "I just focus on doing my job."

On Monday, the Rockies earned a 2-1 victory as the teams played the fourth game of an extended six-game series to close out the season. For the second consecutive game, the Dodgers were unable to become just the second National League team to reach 111 wins, after the 1906 Chicago Cubs, who finished with 116.

The Rockies are nowhere near that level of success with a 67-93 record this season, having already locked up last place in the NL West. But they found the pitching formula to knock off Los Angeles on Monday after taking a 4-1 victory on Sunday.

"There have been a lot of games in the last couple of months where we're in them, we just haven't generated enough offense," Rockies manager Bud Black said. "There have been times we have pitched well enough, or times when late in the game, the game got away from a member of our bullpen. So we've been in a lot of games."

Colorado will send right-hander Ryan Feltner (3-9, 6.01 ERA) to the mound on Tuesday. Feltner's only career outing against the Dodgers came July 29 in relief at Los Angeles, when he gave up three hits in 3 1/3 scoreless innings.

Feltner, in his second major league season, has been a mainstay in the Rockies' rotation since the start of August. However, he is just 2-6 since then, posting a 6.29 ERA in 11 starts.