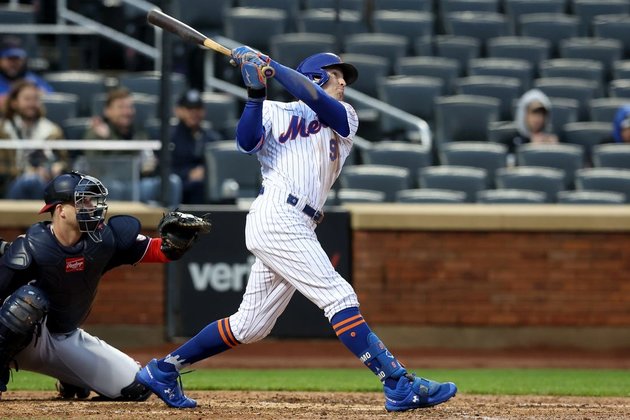 Brandon Nimmo homered and finished with three RBIs for the New York Mets, who at least momentarily maintained their hopes of winning the National League East by defeating the visiting Washington Nationals 4-2 Tuesday in the first game of a doubleheader.

The Braves, who have the tiebreaker by virtue of edging the Mets 10-9 in the season series, visited Miami in a game that began about half an hour before New York closed out its win.

Nimmo finished 3-for-5 and a triple shy of the cycle. He hit a two-RBI double off Nationals starter Cory Abbott (0-5) to open the scoring in the second inning, laced a one-out homer in the fourth for the Mets' final run and singled in the sixth before grounding out to first in the eighth.

Mark Canha lofted a sacrifice fly in the third.

Mets second baseman Jeff McNeil improved his chances of winning the NL batting crown by going 2-for-3 to lift his average to .328. McNeil entered Tuesday just ahead of Los Angeles Dodgers first baseman Freddie Freeman, who is hitting .325 heading into the Dodgers' game later Tuesday against the Colorado Rockies.

Mets starter Carlos Carrasco danced in and out of trouble through the first four innings before being chased in the fifth, when he gave up a leadoff double to Victor Robles before Adams hit a two-run homer to left.

Drew Smith relieved Carrasco and allowed a pair of one-out singles before getting Luke Voit to hit into a double play. David Peterson threw a perfect sixth and Adam Ottavino (6-3) was credited with the win after tossing 1 2/3 hitless innings. Edwin Diaz notched his 32nd save by retiring all four batters he faced.

Carrasco allowed the two runs on five hits and one walk while striking out three in four-plus innings.

Abbott allowed the four runs (three earned) on five hits and four walks while striking out six over four innings.